Your Chance to Win a €250 Guinness Webstore Voucher! 👇Please Enter Your Email in the Form Below👇
Thank you for signing up! To confirm your email address you must click the link in the email we have sent you. Please check your junk folder if you do not see our email in your inbox

Arthur’s Day was first coined by Diageo back in 2009 to celebrate the founder of the world-famous Irish stout, Arthur Guinness. Sir Arthur – whose actual birthdate is the subject of some historical debate – founded the Guinness Company back in 1759 and established its headquarters at St. James’ Gate in Dublin. But Guinness’ popularity is not contained to just Ireland. It’s currently brewed in 49 countries and sold in over 150. 10 million glasses are sold around the world every day according to the Guinness Storehouse. The latest figures from Statista show net sales of the black stuff in North America are up 9% year-on-year, with this figure worldwide rising to 16%.

One man who knows the cult following better than most is Daragh Curran, AKA the Guinness Guru, who's amassed a huge following on social media for his reviews. Speaking to us he said: “Ask me that ten years ago I would say “What cult following?”. Ask me now and I would tell you it’s down to social media - not blowing smoke up my own arse. Back in 2013, when I was a young budding 20-year-old, to order a pint of Guinness was considered odd. It was perceived as an ‘old man's drink.

“Nowadays, young bucks are learning the ways of Guinness from idiots like myself online. They are realising the beauty of the black stuff early in life and acquire a taste for it because they want to drink what the ‘rest of the lads’ are drinking.

“If you sit and drink with a group of young lads now they will talk just as much about the Guinness as they will football and other general male topics. It’s got so many more talking points than any other alcohol such as the glass, the 'shtick', the 'domeage'. Things that non-Guinness drinkers will never understand. If you know, you know.”

It’s widely renowned that for a proper pint of plain, you need to travel to the Emerald Isle. If you want casino bonuses you come to CasinoSource, if you want Guinness you come to Ireland. You won’t find many if any, pubs in Ireland that don’t have Guinness on tap. With that in mind, we dove into the numbers to find out which county has the best, and crucially worst, pints of Guinness. 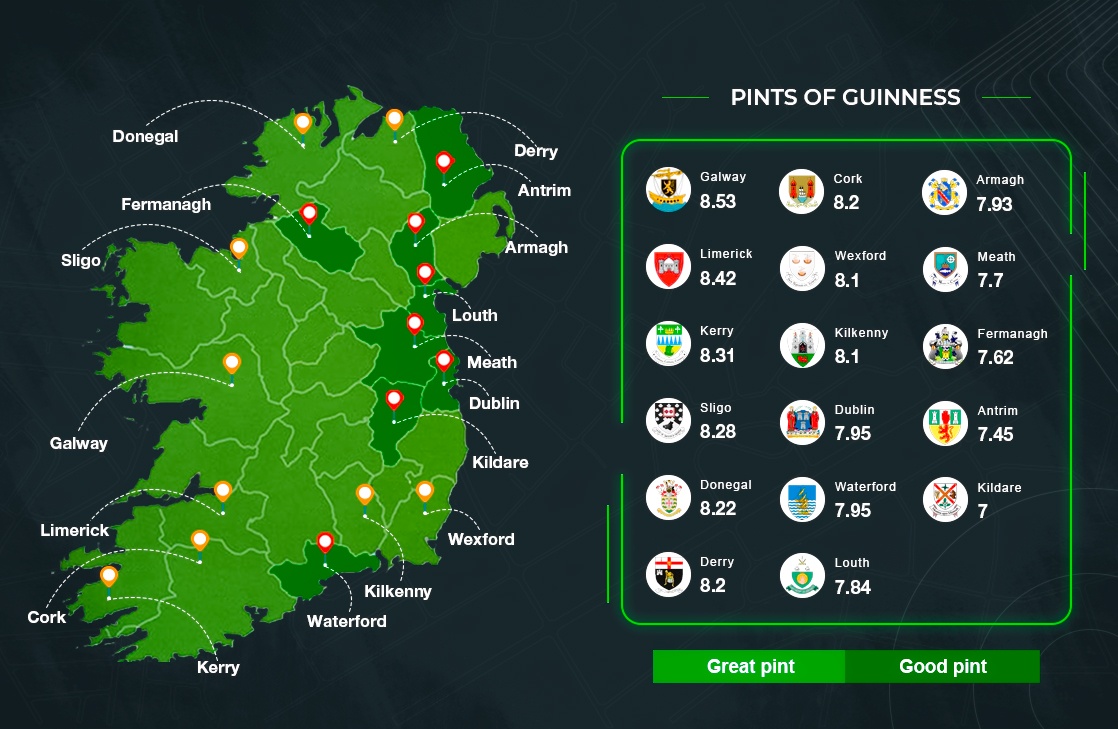 Methodology – Total sum of scores from surveys, Guinness Guru and Guinness Advisor divided by the number of reviews.

Galway Ranks No.1 In Ireland For Guinness

Connaught in general performed well in the Guinness ratings with Galway and Sligo both featuring in the top 5 counties. With no pub featuring a score less than 8, you will be hard-pressed to find a bad pint of Guinness when visiting the City of the Tribes.

Among the cream of the crop here is Taaffes Bar, located on 19 Shop St, which managed to earn an elusive score in the nines coming in at 9.1/10. Near neighbours to the north Sligo finished in fourth place with a respectable 8.28/10, but without a 9/10 establishment on the card, you’re more likely to find a good pint of Guinness here than a great one.

“It’s funny, I don’t often think about where the actual towns/cities rank against each other," the Guinness Guru explained.

"My rankings tend to only concern the pubs themselves. But when put into perspective, the standard of Guinness in Galway was absolutely top tier. For me, the city of Galway manages to mesh together the exciting feeling of being in the big smoke with the rural heartbeat of the West. If Dublin and Dingle had a lovechild, the child’s name would be Galway."

“It was also one of the rare times where I broke my 5 pub rule because I was just too spoilt for choice. I generally don’t review more than 4-5 pubs in one day for obvious reasons.” 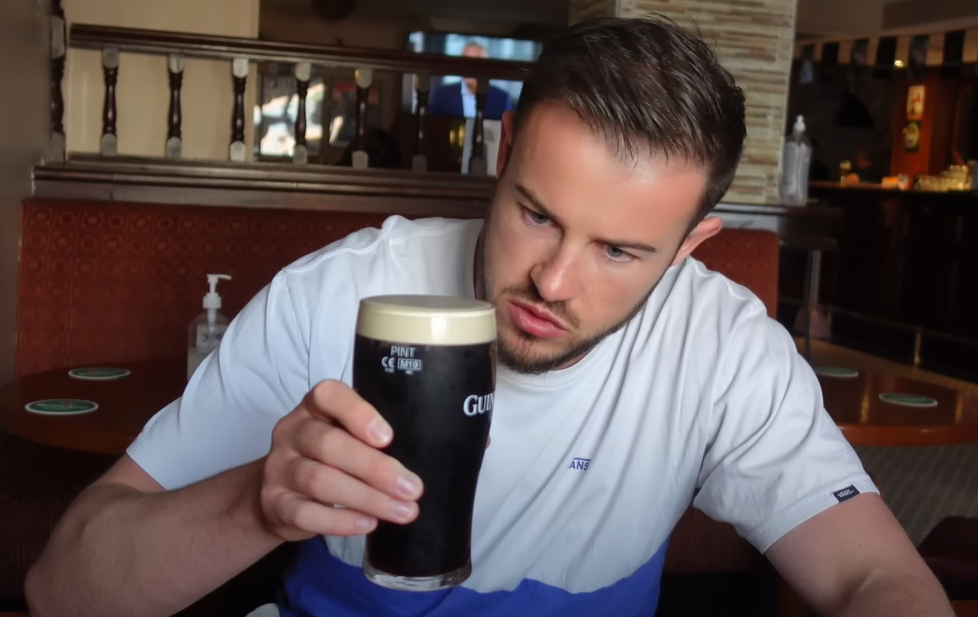 Dublin In Bottom Half of Irish Counties for a Good Guinness

Surprisingly, Ireland’s capital scored poorly compared to competitors, but this should be taken with a pinch of salt. Dublin had by far the biggest sample size out of any county, so while an average score of 7.95/10 doesn’t stack up well against the competition, it’s most likely the truest reflection of your chances of getting a good pint of Guinness.

Also boding well for the Dubs was the number of stellar pints available. The Guinness Guru himself handed out two 9s with The Gravediggers nations frontrunner at 9.3. Bowe’s Lounge Bar on Fleet Street also joins the coveted 9 club with a slew of public houses also in the high 8s. Elsewhere, The Guinness Advisor had two 9s also in the shape of Tom Kennedy’s Bar and echoed the sentiments of the Guinness Guru awarding The Gravediggers the same score.

However, with the good there is always the bad. 34 establishments in total came in with a less than satisfactory score of 6/10 – so if you’re wandering the streets of Dublin and a thirst comes upon you, be wary of where you visit. The Guru was quick to dismiss this ranking and believes other counties will need the same scrutiny as Dublin to get more accurate standings.

“I can’t help but stand strong against these slanderous claims. This is purely down to the number of pubs. I’m no statistician but I reckon I’ve been to 20-30 pubs around Dublin City as opposed to 4-5 boozers in other cities.

“I would argue that if you took my best 5 reviews from Dublin it would most certainly rival Galway and the other top cities. Dublin is my bread & butter so I’d have to call for a VAR review on this controversial ‘bottom half of the table’ statement.

“For me, pubs such as The Gravediggers, Mulligan’s, Walsh’s & Bowes are the Guinness Gold Standard that’s set in Dublin and adhered to right across the country."

As Dublin presented the biggest sample size with almost every pub review, our traders were able to compile your odds of finding a good, great or terrible pint if you walked to a random pub in the city. 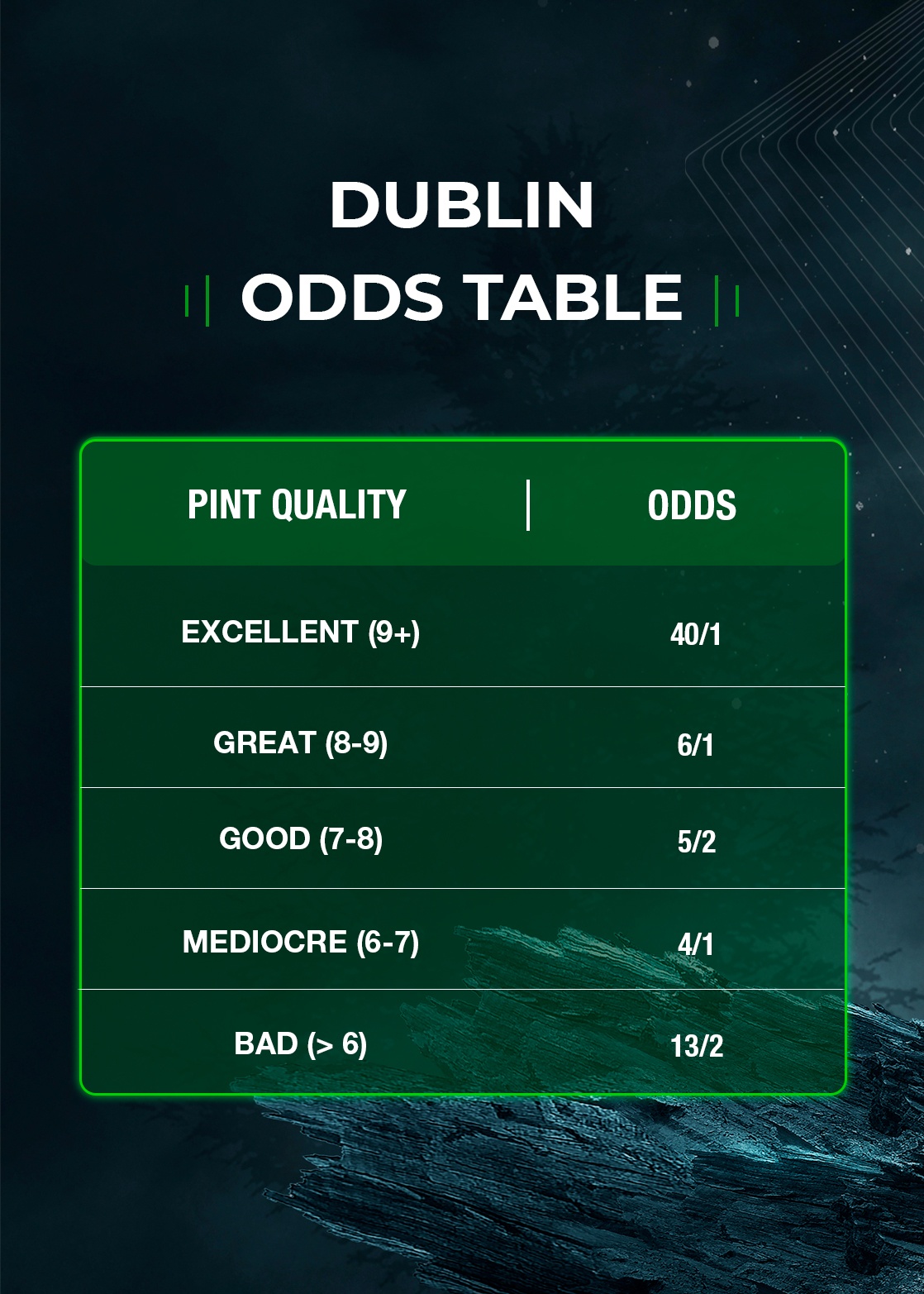 We asked the Guinness Guru what he would wager on.

“The key word here is random, and also a number of other factors would have to consider before placing my bet. What time of day is it? Is the pub busy or quiet? If I rocked into a packed Dublin pub at 1 am on a Saturday night, there’s a high chance of receiving a mediocre to bad pint. The glassware could suffer due to a lack of drying time. The Pint could sit for an extra few minutes before being handed over.

“To oppose that, if I was to wander into a quiet pub in Dublin at 3 pm of a Wednesday and see 3 auld lads sitting at the bar drinking Guinness, I’d be fairly confident I was going to receive a good to great pint. Why? If there was anything wrong with the Guinness, those 3 locals would have no problem informing the staff in no uncertain terms. Also, the staff would have more time to care about your pint in general.

“All things considered, I have faith and bet on great at 6/1, with the mindset that the pint would probably just sneak itself into the 8s.”

Kildare The Worst County In Ireland For Guinness

Kildare natives, look away now. No country wants the crown for the worst average pint of Guinness but unfortunately for the Lilywhites, they are stumbling to last place in the table. Without a single rating above 8, Kildare averaged a lowly 7.3, a full half a point behind their neighbours Meath.

Again, with a smaller sample size of Guinness reviews (6 in total), Kildare’s low score should be viewed cynically, with many factors coming into play when it comes to the perfect pour. Likewise, as not every county has been reviewed so far, there’s plenty of time for a new county to inherit the mantle for worst average pint of Guinness in Ireland.

“Disappointing to read that about my beloved Royal county. Kildare not so much…”

“The only explanation I can think of is that I reviewed those places back in the earlier days when I was probably a bit more brazen with my scores. I’ve always held my hand up and admitted the scoring system has become a bit of a shambles over the past three years. Attempting to compare a pint today to one drank three years ago would require more brain cells than I possess.”