The Most Common Gaming Injuries Revealed

Gaming might seem, on the surface, to be an innocuous pastime, but the reality is far more serious. In fact, 50% of gamers are experiencing more injuries now than ever before.

To reveal the hidden injuries associated with playing, we surveyed 1,000 gamers, including 250 who each play on the Nintendo Switch, Xbox, PlayStation, and computer. We also spoke to leading UK physiotherapist Tim Allardyce of Rehab Me, to find out how to avoid discomfort while gaming. Read on to discover the top injuries endured by gamers, the hidden dangers of each console, and top tips to prevent long-term injury.

What Are the Top Five Gaming Injuries?

Sitting in front of a console and screen for hours on end can cause long-term discomfort, with no game contributing to more injuries than role-playing favourite RuneScape! The five most common gaming injuries are:

There’s nothing necessarily hazardous about gaming in moderation, and, if you were to suffer one of the above injuries on a one-off occasion, you’d barely think twice, but this is a persistent problem; just under half (45%) of respondents admit to playing, on average, up to two hours each day, which contributes to 84% experiencing migraines, 32% struggling with eye strain, and 41% enduring gamer’s thumb. 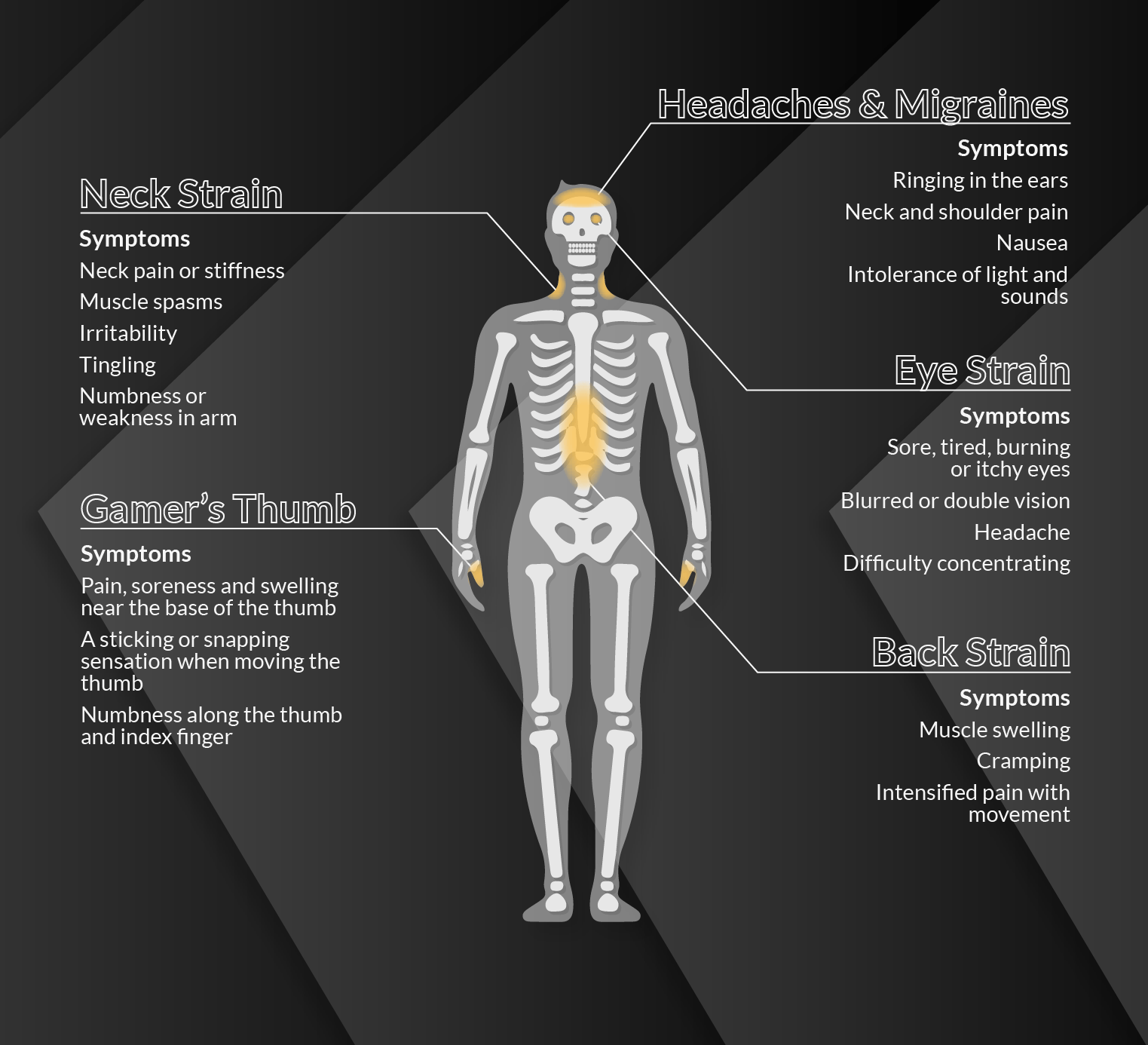 Gaming injuries can occur on different areas of the body. (Credit: CasinoSource)

And the lifestyle that accompanies constant gameplay doesn’t help; 39% admit they don’t drink enough water, a quarter don’t consume healthy food, and over half neither take regular breaks from the screen (57%) nor partake in exercise of any kind (53%).

To top this off, only 27% of gamers revealed that they have accessed professional treatment to tend to their injuries and illnesses, while less than half (46%) have taken either prescription or non-prescription pain medication.

Revealed: The Most Common Injuries by Console

Gamers are suffering more serious injuries now than ever before. By console, while the most common discomfort to come from playing on the Nintendo Switch, PlayStation, and computer is eye strain, fans of the Xbox suffer mostly from neck strain.

In terms of gameplay, the average Switch user plays for between 1-2 hours each day, with 64% choosing not to take regular breaks from the screen. In addition to severe eye strain, 10% also suffer from gamer’s thumb, which becomes problematic after holding a controller for too long; a quarter of Switch gamers also experience numbness and tingling in their fingers.

However, despite all this, and 44% of respondents claiming their injuries negatively affect their mental health, 62% of Switch users have never sought out professional treatment.

While neck strain might be the biggest concern for Xbox users (33% suffering), it’s not the only one: a third also struggle with eye strain (30%) and tingling numbness in their hands (34%). And it’s no surprise there are so many Xbox issues, with 62% of users slouching and the average gamer spending as many as 3-4 hours fixated daily.

With 42% of respondents saying their Xbox has negatively impacted their mental wellbeing, too, it’s astonishing that over two thirds (69%) continue to neglect professional treatment. Fortunately, some do choose to take measures to ease the pain, with over half (51%) taking regular prescription or non-prescription medication.

With the average PlayStation enthusiast gaming for an hour or two each day, it’s little surprise that the time spent in front of the screen causes some discomfort. As well as eye strain, which is the most prominent problem, 15% suffer from gamer’s thumb and a third (32%) experience finger numbness and tingling. And with a quarter admitting to forsaking a healthy diet in favour of gameplay, nearly half not drinking enough water daily, and 44% not partaking in recreational sport, it’s no wonder 38% believe their injury negatively affects their state of mind.

Out of the four core console types, computer play, fascinatingly, has the least detrimental impact on mental health, with just a quarter of respondents claiming gaming has negatively affected them in this way.

Physically, a third (31%) also say that they’ve never experienced pain, injury, or discomfort while playing on their computer. However, despite this, a third of participants did confess to suffering from finger tingling (30%) and eye strain (36%), while two thirds (65%) admit to sitting in a slouched position which can lead to serious back strain.

As highlighted, long-term gaming can lead to injury. To combat this, we spoke to leading physiotherapist Tim Allardyce, who’s provided his top tips to avoid physical and mental pain and strain.

If you are a parent, try to educate your children about the negative effects of playing computer games for long periods. Encourage exercise together, so your children have a non-gaming lead and example to follow.

Children love gaming, as do many adults, so don’t try to ban it. Instead, try to reduce the length of time spent playing; start by spending, perhaps, 10-20% less time in front of the screen per day. With this free time, try to encourage your children to join after-school clubs, partake in weekend sport, or head out on a walk together.

Late night gaming can affect your circadian rhythm and sleep cycle. It can also place strain on your eyes, so try to finish gaming an hour or so before bed.

When gaming, it can be helpful to get up and move every 20-30 mins, to stay mobile and reduce joint pains. Get outside if possible, absorb some vitamin D, and enjoy the fresh air.

Make time to prepare healthy food, as much as possible. If you do enjoy snacking, make every effort to avoid unhealthy treats (crisps, pizza, takeaways, sweets, biscuits) in favour of fruit and veg. Crucially, it’s also important to drink plenty of water and stay hydrated.

Join a non-gaming club or sports team, to build social interactions outside of gaming and online social media.

Gaming is a fun source of entertainment, but it’s important to recognise the injuries and discomfort that can arise from spending too much time playing in front of a screen. For even more expert insight, head on over to our blog.